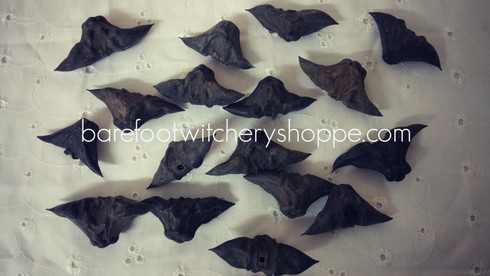 In China, the bat is a lucky animal, because the name "Bat" (Fu) sounds just like the word for happiness (Fu), so to the Chinese, who know this pod as the Ling Nut, it is considered good luck.

Its exotic and dark appearance has led it to be used for adorning altars to some of the darker gods. It would be perfect for those altars dedicated to tricksters such as Elegua (Papa Legba), Hades, or Loki. It could be used to represent Baphomet on an altar as well, depending on your path.

In Hoodoo, this pod is often used for protection and to ward off evil, and for that purpose it can be placed above a doorway, facing outward as a guardian, much in the manner of ancient Tibetan door demons. It can be used in mojo bags for breaking hexes or for protection in general. You can carry one as a talisman for protection from negative energy or wear one as an amulet.

I recommend dressing it with my Uncrossing oil or any of my protective oils or those that repel negative energy and turn back hexes.

Because these are more common in some parts of the world than some folks would lead you to believe, I am selling them at $1 each.  I've seen them elsewhere for $3 and up, and up. But there is no reason they should be so expensive. They may be rare in certain areas, but in others they are plentiful and the plants have become a nuisance.

Size varies, as the photo shows. But they are all about the same, about 2" wide. There is one smaller one in the photo with the ruler. I'm obviously not going to send you one that small unless you specifically ask for one that tiny and need one that small.  I've got a PLENTIFUL supply of these, so I will fill your order with the ones of average size which are 1 1/2 - 2 inches wide, some a little larger.