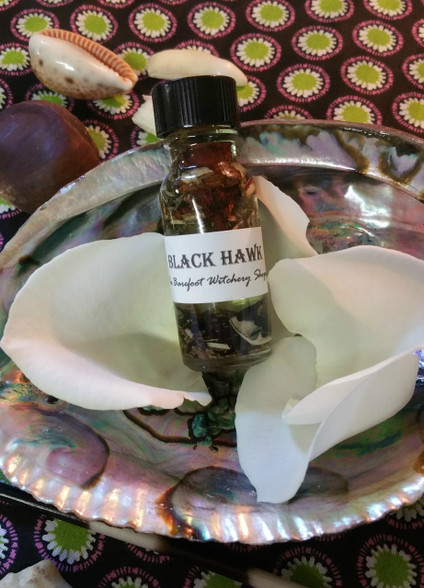 Black Hawk (Blackhawk) Spiritual Oil is used for battling enemies, protection, defense, as well as guidance and messages.  It is used to petition the great Indian Spirit Guide.  This oil can be used with a Hoodoo oil lamp made of pure olive oil on which an arrowhead has been placed and burned to petition and pray to Black Hawk until your prayers are answered.

Black Hawk was a brave warrior of the Sauk and Fox tribe and lived from the late 18th to early 19th century. He is  honored for his bravery, resistance, and leadership despite devastating government and military action against his tribe.

The Spiritual Churches of New Orleans still recognize and honor Black Hawk as a very active and strong spirit guide, and many today call upon and ritually work with Black Hawk  and petition his spirit for the purposes of guidance, protection and justice.

My oil contains all of the traditional New Orleans formula ingredients which includes Indian Tobacco (I use high end tobacco purchased from a Tribal smoke shop on the Osage Nation Reservation where I live), plus a pinch of dirt from the banks of the Illinois River (the river that runs through where Black Hawk lived and fought his great battles.  The Illinois River also runs through Oklahoma near where I live and we have taken canoe trips down the river many times, so I've been blessed to have opportunity to gather the dirt that is part of this formula)