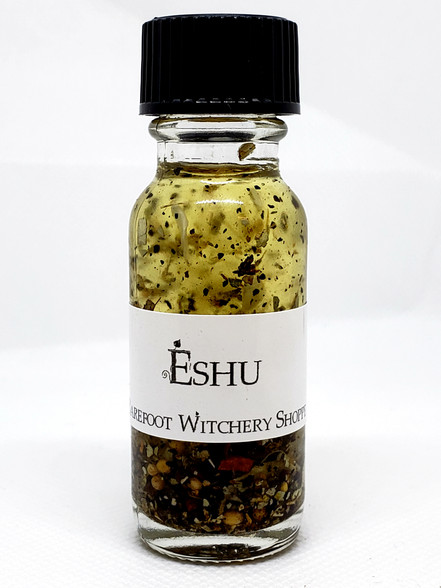 Eshu Oil .50 ounce glass bottle. Crafted with coffee, cinnamon, coconut, sea salt, cloves, and much more, with great respect and regard to the specific traits and attributes of Eshu.

Eshu (Yoruba: Èṣù, also known as Echú, Exu or Exú) is an Orisha in the Yoruba religion of the Yoruba people (originating from Yorubaland, an area in and around present-day Nigeria). As the religion has spread around the world, the name of this Orisha has varied in different locations, but the beliefs remain similar.

Eshu partially serves as an alternate name for Eleggua, the messenger for all Orishas, and that there are 256 paths to Eleggua—each one of which is an Eshu. It is believed that Eshu is an Orisha similar to Eleggua, but there are only 101 paths to Eshu according to ocha, rather than the 256 paths to Eleggua according to Ifá.[2] Eshu is known as the "Father who gave birth to Ogboni", and is also thought to be agile and always willing to rise to a challenge.[3]

Both ocha and Ifá share some paths, however. Eshu Ayé is said to work closely with Orisha Olokun and is thought to walk on the shore of the beach. Eshu Bi is a stern and forceful avatar, appearing as both an old man and young boy, who walked with Shangó and Oyá (the initial two Ibeyi), and Eshu Bi protects both of these, as well as all other small children. Eshu Laroye is an avatar believed to be the companion of Oshún and believed to be one of the most important Eshus, and the avatar of Eshu Laroye is thought to be talkative and small.

To understand more about Eshu is to learn more about Eleggua and Papa Legba, counterparts and believed to be the same Spirit called by another name in different traditions, religions, and geographical locations.

Eshu shares many of the same attributes to Ganesha and St. Michael.

He is the communicator between other Orishas and the guardian of the gates, doorways, and crossroads. Excellent for petitioning regarding road opener work, Master Key work, and blockbuster.

Source Credit: Original Botanica in part, and Wikipedia, in part.