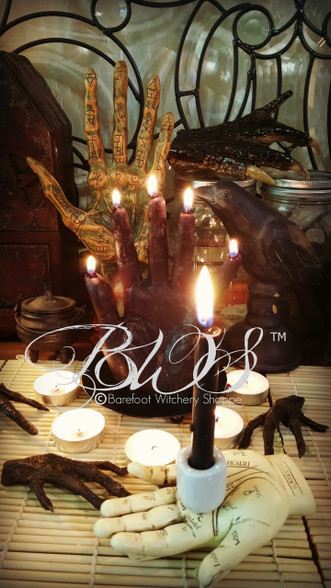 This Hand of Glory figural candle service is intended to serve the purpose of summoning the spirits of the deceased to assist you in carrying out your intention when you need supernatural assistance in gaining the upper hand over someone or something, or causing harm to someone by means other than your own physical abilities. In other words, you are going to be asking the dead to carry out your will, for good or evil.

The key to this spell is my personal stock of Hand of Glory Oil, blended with herbs, roots, and essential oils whose metaphysical properties are reputed to aid in communication with and the spirit world and invite the presence of those who have passed on. It also contains Five Finger Grass and a Lucky Hand Root, along with other secrets. It also contains Grave Dirt from the grave of a criminal who died before ever being brought to justice. Plus it also contains (legally obtained) human remains, in the form of 3 hand bones (what is thought to be the 5th proximal phalange, and two carpal bones—one is either the Lunate or Trapezium, and the other is the Scaphoid.) The Hand of Glory oil that I sell in my shop is .50 ounces taken from my pure personal stock, which contains these bones. I replenish the bottle containing my personal supply monthly in the same moon phase in which it was originally created.

I will personally prepare and fix this Hand of Glory candle for you, and inscribe your personal information according to your purpose into the candle. It will be dressed with my personal stock of Hand of Glory Oil. This candle service costs a little more than my other figural candle services due in part to the hadmade nature of the candle and the limited supply that I have of them. I pay full price to the person who creates them for me, and they're not easily available in bulk quantities or wholesale.

You may send any details such as photos, names, and dates of birth for yourself and for your target, along with any petition you wish me to use to barefootwitcheryshoppe@yahoo.com.

You will receive: A Word Document or a PDF via email with detailed information and photos about your spell service including initial photos of your candle being prepared (you will see your info / pics in the photo you receive and will be assured that the spell was performed for you personally). After the candle is finished, I take photos of it as well, and provide those to you along with interpretation of any divination signs regarding the candle, such as wax, smoke, and flame patterns. This listing is for a service, (Hand of Glory figural candle, not the glass 7 day candle service which is a seperate listing)  and not the physical product of the candle and the oil. I do offer those for sale in my shop, but I know that a lot of times it is hard to perform spellwork personally in your own home due to privacy issues, or the time that it takes to perform spellwork.  Also, sometimes shipping times and charges do not permit you to do it as quickly as you need to. If you need this spell quickly, please be aware I stay booked about 2 weeks in advanced and complete requests in the order in which they were received, but I do make exceptions if someone needs to purchase an urgency fee listing, which I also offer here on my website.

*Other candles and curios in the photo are for display purposes only and are not included with this purchase.

History and Legend about the Hand of Glory:

(References: Wikipedia and The Whitby Museum in England)

The Hand of Glory is the dried and pickled hand of a man who has been hanged, often specified as being the left (Latin: sinister) hand, or, if the man were hanged for murder, the hand that "did the deed."

Old European beliefs attribute great powers to a Hand of Glory combined with a candle made from fat from the corpse of the same malefactor who died on the gallows. The candle so made, lighted, and placed (as if in a candlestick) in the Hand of Glory, would have rendered motionless all persons to whom it was presented. The process for preparing the hand and the candle are described in 18th century documents, with certain steps disputed due to difficulty in properly translating phrases from that era. The concept inspired short stories and poems in the 19th century.

The term itself derives from the French main de gloire, a corruption of mandragore, the genus of plants commonly called mandrake.

According to old European beliefs, a candle made of the fat from a malefactor who died on the gallows, lighted, and placed (as if in a candlestick) in the Hand of Glory, which comes from the same man as the fat in the candle, this would render motionless all persons to whom it was presented. The method for holding the candle is sketched in Petit Albert. The candle could be put out only with milk. In another version, the hair of the dead man is used as a wick, and the candle would give light only to the holder. The Hand of Glory also purportedly had the power to unlock any door it came across. The method of making a Hand of Glory is described in Petit Albert, and in the Compendium Maleficarum.

The 1722 Petit Albert describes in detail how to make a Hand of Glory, as cited from him by Grillot De Givry:

Take the right or left hand of a felon who is hanging from a gibbet beside a highway; wrap it in part of a funeral pall and so wrapped squeeze it well. Then put it into an earthenware vessel with zimat, nitre, salt and long peppers, the whole well powdered. Leave it in this vessel for a fortnight, then take it out and expose it to full sunlight during the dog-days until it becomes quite dry. If the sun is not strong enough put it in an oven with fern and vervain. Next make a kind of candle from the fat of a gibbeted felon, virgin wax, sesame, and ponie, and use the Hand of Glory as a candlestick to hold this candle when lighted, and then those in every place into which you go with this baneful instrument shall remain motionless

The Hand of Glory would become ineffective, and thieves would not be able to utilize it, if you were to rub the threshold or other parts of the house by which they may enter with an unguent composed of the gall of a black cat, the fat of a white hen, and the blood of the screech-owl; this substance must be compounded during the dog-days

An actual Hand of Glory is kept at the Whitby Museum in North Yorkshire, England, together with a text published in a book from 1823.[1] In this manuscript text, the way to make the Hand of Glory is as follows:

It must be cut from the body of a criminal on the gibbet; pickled in salt, and the urine of man, woman, dog, horse and mare; smoked with herbs and hay for a month; hung on an oak tree for three nights running, then laid at a crossroads, then hung on a church door for one night while the maker keeps watch in the porch-"and if it be that no fear hath driven you forth from the porch...then the hand be true won, and it be yours"

The second of the Ingoldsby Legends, "The Hand of Glory, or, The Nurse's Story", describes the making and use of a Hand of Glory. The first lines are:

To the Dead Man's knock!

Nor move, nor swerve,

At the spell of the Dead Man's hand!

But be as In J.K. Rowling's Harry Potter and the Chamber of Secrets, Draco Malfoy sees a Hand of Glory in Borgin and Burkes, a specialist Dark Arts shop. He is told by Mr Borgin that it "gives light only to the holder". Draco later buys the hand and uses it in Harry Potter and the Half Blood Prince.the dead for the Dead Man's sake!

Stories of the use of such hands became common across Europe, from Finland to Italy and Western Ireland to Russia in the last four hundred years. At least two were current in North Yorkshire, one relating to the Spital Inn on Stainmore in 1797 and the other to the Oak Tree Inn, Leeming, supposedly in 1824. The following shorter, but typical, version comes from Northumberland.

"One dark night, when all was shut up, there came a tap at the door of a lone inn in the middle of a barren moor. The door was opened, and there stood without, shivering and shaking, a poor beggar, his rags soaked with rain, and his hands white with cold. He asked piteously for a lodging, and it was cheerfully granted him; there was not a spare bed in the house, but he could lie on the mat before the kitchen fire, and welcome.

So this was settled, and every one in the house went to bed except the cook, who from the back kitchen could see into the large room through a pane of glass let into the door. She watched the beggar, and saw him, as soon as he was left alone, draw himself up from the floor, seat himself at the table, extract from his pocket a brown withered human hand, and set it upright in the candlestick. He then anointed the fingers, and applying a match to them, they began to flame. Filled with horror, the cook rushed up the back stairs, and endeavoured to arouse her master and the men of the house. But all was in vain - they slept a charmed sleep; so in despair she hastened down again, and placed herself at her post of observation.

She saw the fingers of the hand flaming, but the thumb remained unlighted, because one inmate of the house was awake. The beggar was busy collecting the valuables around him into a large sack, and having taken all he cared for in the large room, he entered another. On this the woman ran in, and, seizing the light, tried to extinguish the flames. But this was not so easy. She poured the dregs of a beer jug over them, but they blazed up the brighter. As a last resource, she caught up a jug of milk, and dashed it over the four lambent flames, and they died out at once. Uttering a loud cry, she rushed to the door of the apartment the beggar had entered, and locked it. The whole family was aroused, and the thief easily secured and hanged."