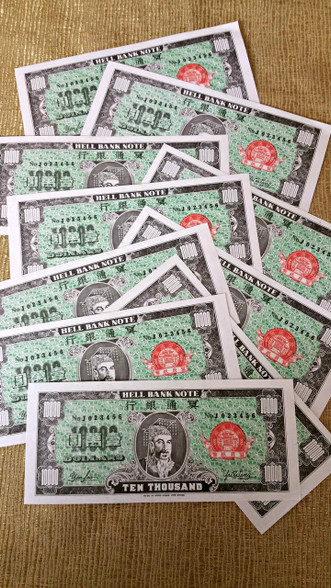 This listing is for ten Hell Bank Notes in $10,000 denomination.

Hell bank notes are a more modern form of joss paper, an afterlife monetary paper offering used in traditional Chinese ancestor veneration, that can be printed in the style of western or Chinese paper bank notes. In Chinese cultures, the hell bank note has no special name or status, and is simply regarded and referred to as yet another form of joss paper (冥幣, 紙錢, 金紙).

Regardless of the presentation, Hell Bank Notes are also known for their large denominations, ranging from $10,000, $100,000, $1,000,000 or even $500,000,000. In Singapore, it is extremely common to find 10 billion dollar banknotes in shops. On every bill, it features an image of the Jade Emperor, the presiding monarch of heaven in Taoism and his Western signature (Yu Wong, or Yuk Wong) countersigned by Yanluo, King of Hell (Yen Loo). On the back of each bill, it features a portrait of the bank of Hell."

The word hell on hell bank notes refers to Diyu meaning "Underworld Court." In traditional Chinese beliefs, it is thought to be where the souls of the dead are first judged by the Lord of the Earthly Court . After being judged they are either escorted to heaven or sent into the maze of underground levels and chambers to atone for their sins. People believe that even in the earthy court, spirits need to use money.

A story says that the word hell was introduced to China by Christian missionaries, who preached that all non-Christian Chinese people would "go to hell" when they died, and through a case of misinterpretation, it was believed that the word "Hell" was the proper English term for the afterlife, and hence the word was adopted.

Hell Money has also found a niche among practitioners of various forms of eclectic magic in the United States including Hoodoo. Some people employ it as symbolic money when working money-drawing spells, using it to decorate their altars, adding it to money-drawing mojo bags or spells. Others utilize it as a form of attractant or pay-off for benign or infernal spirits.

You can anoint one of these bills with one of my money drawing oils to draw prosperity to you.  You may also anoint with an appropriate oil and use as an offering to a deity or saint in order to petition them and receive their blessings.  You can use these on your ancestral altar, as well.  The Chinese culture traditionally burn these during Hungry Ghost Month.  You can also burn them for your ancestors on Samhain or Dia De Los Muertos.

If you would like to read more about Hungry Ghost Month and Chinese culture, you may find this article helpful: http://chineseculture.about.com/od/chinesefestivals/a/Hungry-Ghost-Month-Hungry-Ghost-Festival.htm