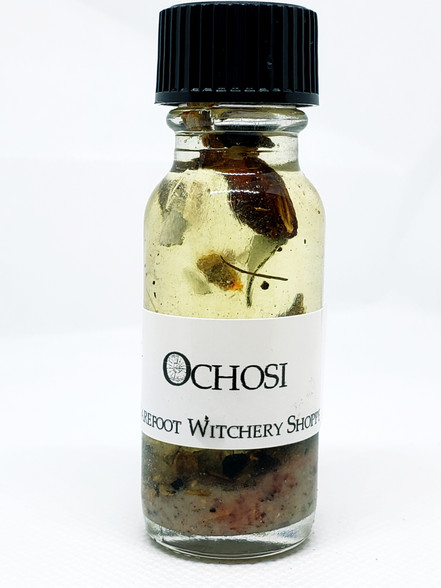 Ochosi Oil .50 ounce glass bottle. Crafted with wild yam root, tobacco, cascara Sagrada, deer antler velvet, and much more, with great respect and regard to the specific traits and attributes of Ochosi.

Ochosi is a warrior and a hunter and fisherman.  His domain is the wilderness.  He tracks, undetected, and never misses his mark.  He is also a protector of animals and is the patron of those who work with dogs. He is also the spirit of meals because it is he who provides food.  He is associated with lightness, astuteness, stealth, wisdom, and craftiness in the hunt.

Son of Yemaya, he is the patron to those having problems with the law. Ochosi watches over anyone experiencing legal problems and rules over police officers, lawyers and the court system. He is said to believe in blind justice, bravely defending the innocent and standing up against inequality.

This hunter is also believed to have powerful visions and shamanic powers. He works with Elegua and Ogun to increase ones spiritual abilities. Elegua opens the mind, Ogun clears it of any distractions and Ochosi works with the focus of his arrow to help you to receive the messages that are coming to you.

Ochosi’s altar should include a crossbow inside of Ogun’s cauldron. Burn an Ochosi 7 day Orisha candle while praying to a statue of this fearless protector. The Alamo plant is considered sacred to Ochosi. Prepare a spiritual bath by steeping the herb in boiling water for 10 minutes. Let it cool and then strain it. Pour the liquid over you in the tub while focusing your intentions on the justice you seek.

Wear an Ochosi necklace or Ochosi bracelet on your next court date to shelter yourself with his strength. Carry an Ochosi prayer card with you for protection and peace of mind. Celebrate Ochosi on his feast day, June 7th, by presenting him with his favorite foods. Ochosi is especially fond of all hunted game animals and fowl. He also enjoys fruits such as plantains, pomegranates, bananas, grapes and pears. Animals sacrificed to Oxóssi rituals are goat, cooked pig, and guinea fowl.

Oxossí is syncretized with Saint Sebastian in the Rio de Janeiro region, the patron saint of the city. He is associated with Saint George in the Bahia region.

Source Credit: Original Botanica in part, and Wikipedia, in part.