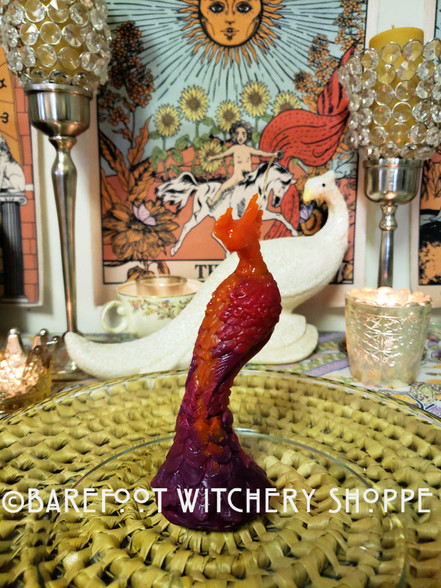 Early last year, I began working on an idea for a new service, and I inquired around about and searched for a phoenix candle, with not much success finding exactly what I had pictured in my mind after sharing my idea.

Just because I could not find an ideal candle or someone who could make one that would suitably fit the image in my mind did not mean that the idea was going to have to be lost. It was merely delayed. There is a time and a season for everything. My vision has been resurrected, just as the phoenix. Yours can be too.

We are often beat down, feel defeated, or lose inspiration or motivation. But that doesn’t mean it’s over. Just when you think all is lost, the embers stir, and the phoenix rises from the ashes.

Sometimes, we can burn ourselves out. Completely exhaust and deplete our own reserves. The Phoenix is about rejuvenation. When you hit a brick wall, it’s OK to stop and rest. Don’t keep pushing yourself when you have no more steam. It will do you more harm than good, and it will do your situation or others no good at all. Do what you have to do to replenish your stores of energy, then take up flight again.

Some things are also meant to come to an end. Such as relationships, jobs, situations that we have outgrown, or circumstances that are toxic for us. The Phoenix is also about death and destruction, and being reborn from it. So when one door closes (or when it is time for you to shut that door yourself and block it securely), another one will open. A better one, the right one, the one meant for you. Know when it is time to leave.

Sometimes we feel as though all is lost. Like nothing can ever change. The Phoenix is a reminder that something better can come from any situation that seems devastating. Whatever you are facing, in your personal life, within yourself, at your job, in your relationships, you can rise from it. You can stop and blow on those embers within yourself until they are a roaring inferno of transformation. You’ll be the greatest comeback story of all time, and you will be an inspiration to others.

Things that are meant to keep us down, defeat us, or destroy us, and other trials by fire only serve to strengthen us. Because we arise anew from the flames. The battles you are fighting are not by accident or because you are weak. They may even believe they succeeded in defeating you. But they were wrong. They see something in you they fear, or they see something in you they covet. Perhaps it is your ability to transform, to recreate yourself.

We all have an inner light. Sometimes it grows so dim we think it is extinguished. But it is still there, if you look for it. Blow on it a little bit, if there is no one there to fan the flame for you. The Phoenix doesn’t need any help recreating itself. You have the power to rejuvenate yourself, to be reborn and arise and come into your power. You had the ability all along. Maybe you have just forgotten.

What is your phoenix? Perhaps it is your dream you thought was dead. Everyone deserves to have a dream and pursue it. Maybe it is overcoming addiction, overcoming oppression, doing your shadow work, painful history or trauma? Perhaps it is the feeling of being crossed or a seemingly strange series of unfortunate events. Maybe you are experiencing a dark night of the soul. Or maybe it is constant criticism, manipulation, or judgement from someone else. Oh honey, don’t worry, they would criticize you if you walked on water. But wait till they see you fly!

About the symbolism and mythology of the Phoenix. The Phoenix is known throughout many cultures and spiritual traditions throughout history. It was thought to live several hundred years before bursting into flames and being reborn from the ashes. It can be seen in Christian traditions to symbolize Jesus being crucified and rising again on the 3rd day, as well as in Jewish, Russian, Japanese, Egyptian, Arab, and Greek mythology, as well as Native American traditions as the thunderbird. It is also known in Chinese traditions to symbolize the sun, as well as the Chinese Empress and feminine grace. It is representative of the Chinese virtues of goodness, duty, propriety, kindness, and reliability. (Sources of reference: Wikipedia.com, ancient-origins.net)

The candles used for this service are made by me, from a mold I crafted myself on January 31, 2021. No two will be exactly alike in color, intentionally. But all are beautiful, as you are. Service listed and advertised February 2, 2021.

All prices are in USD. © 2021 The Barefoot Witchery Shoppe. Sitemap | Shopping Cart Software by BigCommerce