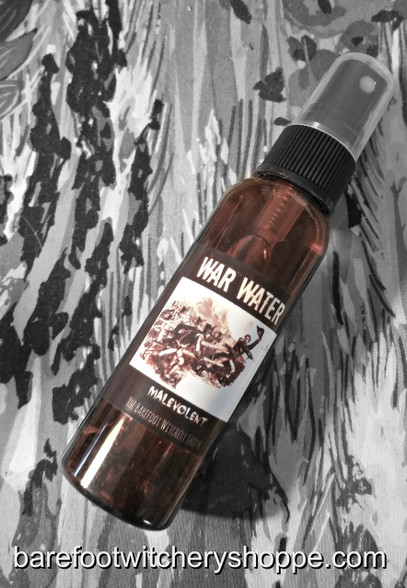 This listing is for a 2 ounce mister spray bottle of Malevolet War Water, which is a more aggressive variation of War Water, or Mars Water.

War water is for protection against enemy tricks and psychic warfare. It will cause any spell which is placed on your doorstep to instantly rebound to the sender. This is a more powerful variation for purposes of enemy spellwork.

I make my Malevolent War Water with crystal charged rain water (crystal quartz has been charged under the light of a full moon.) It includes one coffin nail in the bottle, as well as other vile ingredients such as Spanish Moss, Goofer Dust, Red Pepper, Sulfur, powdered dirt dauber nest, graveyard dirt, and more. This is for foot traffic workings, and I find it is much more convenient to deploy it with a spray mister rather than sprinkle. Traditionally, War Water (Malevolent) was used in a glass jar and was thrown at an enemy's doorstep to "declare war" on them, and cause them troubles of all kinds. Since that's a little in the gray area of the law, you can deploy a hex from a distance by dressing a black candle or a poppet with the mixture, or inconspicuously (and I do not condone illegal trespassing, so make sure you are allowed to have access to their property) spritzing their front step with Malevolent War Water.
War Water, which is also commonly called Mars Water or Iron Water, is in its most essential form, simply water in which iron has been allowed to rust. The presence of iron in the water gives it a reddish-brown hue, looking a bit like blood even in some cases.

If you should decide to declare war on an enemy of any kind, be sure to protect yourself, family, and home, and to also perform a cleansing ritual on yourself and home. Be sure to dispose of all ingredients when you are done, far from your home, such as burial in a graveyard or at a crossroads.

Shake well before use, due to the nature of the contents, they tend to settle.