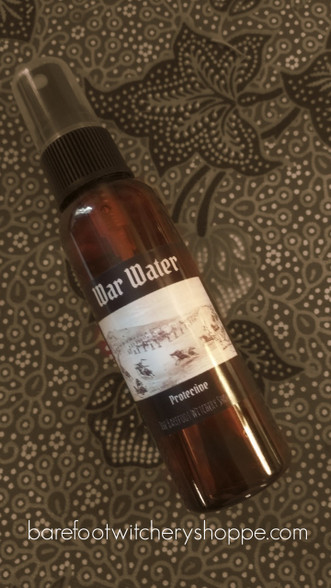 This listing is for a 2 ounce mister spray bottle of War Water, for protection against enemy tricks and psychic warfare.  It will cause any spell which is placed on your doorstep to instantly rebound to the sender.

I make my War Water with crystal charged rain water (crystal quartz has been charged under the light of a full moon.)  It includes one coffin nail in the bottle.  This is for foot traffic workings, and I find it is much more convenient to deploy it with a spray mister rather than sprinkle.

War Water, which is also commonly called Mars Water or Iron Water, is in its most essential form, simply water in which iron has been allowed to rust. The presence of iron in the water gives it a reddish-brown hue, looking a bit like blood even in some cases. Draja Mickaharic makes a good case for why iron’s presence in the water empowers it:

“Iron is the metal of the planet Mars, the planet astrologers credit with ruling warfare and combat, as well as sex. Used either for defense or attack, war water is a strong carrier of the negative emotional energy used in magical battles” (Century of Spells, p. 27).

Cat Yronwode notes on her site that the Martian association indicates that it is not originally an African recipe: “Since the Roman god Mars was the god of war and his symbolic metal was iron, it seems pretty clear that War Water is a European contribution to hoodoo” (“War Water” par. 1). Despite its origins, however, this particular magical mixture is firmly planted in hoodoo and conjure practice now.

Once you have War Water, how do you use it? There are several methods for deploying this water, depending on just what your final intent might be. If you only intend to use the most basic rust-water formula for protective purposes, here are some ways you might apply it: •As an addition to a spiritual bath, or spray on self  (be aware this formula contains rust.  Also, take care not to spray on fabrics, as it will stain.) •As a wash for the outside of your home or business •As a sprinkle for any letters or papers you might be sending out to someone hostile to you (such as legal papers)

Shake well before use, due to the nature of the contents, they tend to settle.